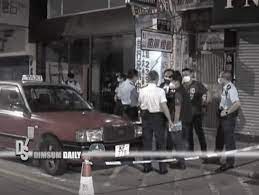 When they arrived at the premises, both the 46-year-old male and 59-year-old woman were assaulted. The man was slashed multiple times.

The police cordoned off the scene and found a knife suspected to be involved in the case in the unit. The case was classified as murder and was handed over to Kowloon West Regional Crime Squad for follow-up. Detectives searched nearby back alleys and garbage bins. During this period, a garbage truck tried to pick up a pile of rubbish on the side of the road, but was stopped by the police.