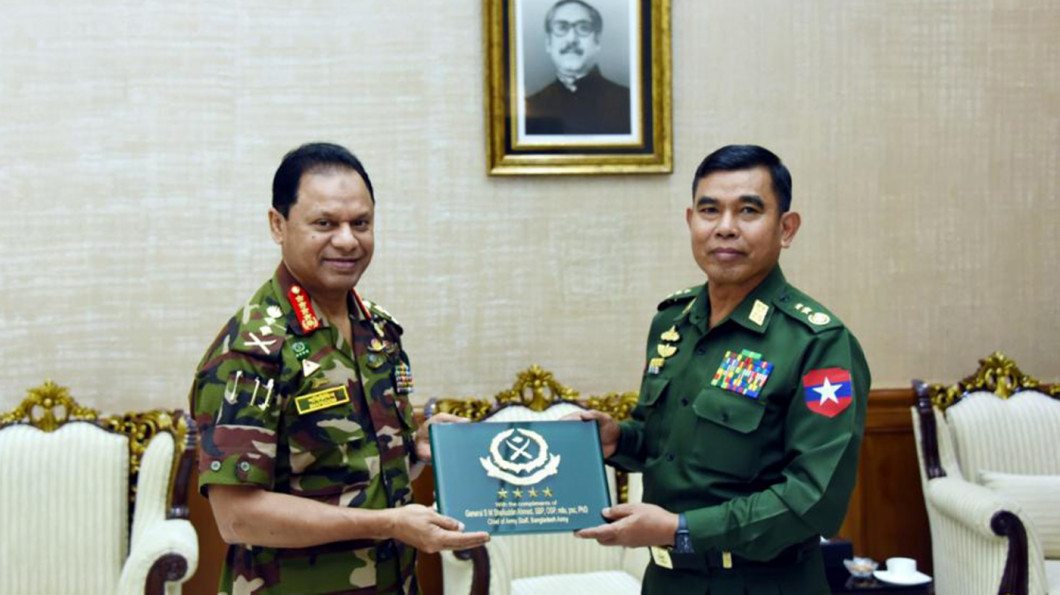 The Bangladeshi defense ministry on Thursday night stated that the regime’s special operation commander, Lieutenant General Phone Myat, explained the situation in Myanmar and how the junta was trying to maintain law and order while working with friendly countries.

He called for Myanmar to work with Bangladesh to ensure regional security and the rapid repatriation of the Rohingya community.

Myanmar junta had not commented on the visit as of Friday.

In September Ahmed said Bangladesh’s armed forces were ready to respond if Myanmar’s junta did not stop firing across the border in pursuit of the Arakan Army (AA).

He said he sent his counterpart in Myanmar a strong message complaining about shelling, shooting and jet and drone flights after a Rohingya refugee was killed and others injured by shelling in hilly Bandarban on the border.

The regime has been battling the AA near the Bangladesh border in northern Rakhine State.

Bangladesh has filed diplomatic complaints since August about fighter jet and drone flights over its territory and mortars and machine gun rounds landing across the border.

On September 16, at least three mortar shells were fired into Bangladesh, killing Mohammad Ikbal, 17, and injuring six others.

Dhaka deployed the Border Guard Bangladesh and Coastguard along the border in response.

The junta’s visit was well-received in Bangladesh.

Retired Major General Shahidul Haque, who had served as defense attache in the Bangladesh embassy in Myanmar, told The Irrawaddy: “It’s a positive development. Bangladesh should not opt for the policy of disengagement with Myanmar.”

He said Myanmar’s military was “very intelligent” and understood the importance of a warm welcome from Bangladesh’s military.

“We must engage with Myanmar and should invite the leadership more often,” the former general said.

Phone Myat currently runs the junta’s Office of the Commander-in-Chief and was deputy minister at the military-controlled Border Affairs Ministry in 2020-21 and chief of the Western Command in 2019-20 and Northeastern Command in 2017-18.

Aung Kyaw Moe, an advisor at the Human Rights Ministry of the civilian National Unity Government, told The Irrawaddy: “Bangladesh has a well-respected military and it is one of the largest contributors of UN peacekeeping troops. Shaking the hands of Myanmar’s regime after the Rohingya genocide, continued war crimes and crimes against humanity against its own people is pretty shameful.”

John Quinley, a human rights specialist at Fortify Rights, said: “It is shameful that the Bangladesh military met with the Myanmar military, including Lt Gen Phone Myat.

“The Myanmar junta is responsible for crimes against humanity, war crimes and genocide.

“Bangladesh hosts more than 1 million Rohingya refugees and under the current conditions in Myanmar repatriation is not possible. The Rohingya in Rakhine State face ongoing persecution and genocide by attrition.

“Governments worldwide should support Bangladesh to protect refugees, education and livelihoods as well as third-country resettlement.

“The Myanmar junta must be stopped. Instead of a photo opp with junta officials, Bangladesh should support the National Unity Government and those resisting the illegal regime.”