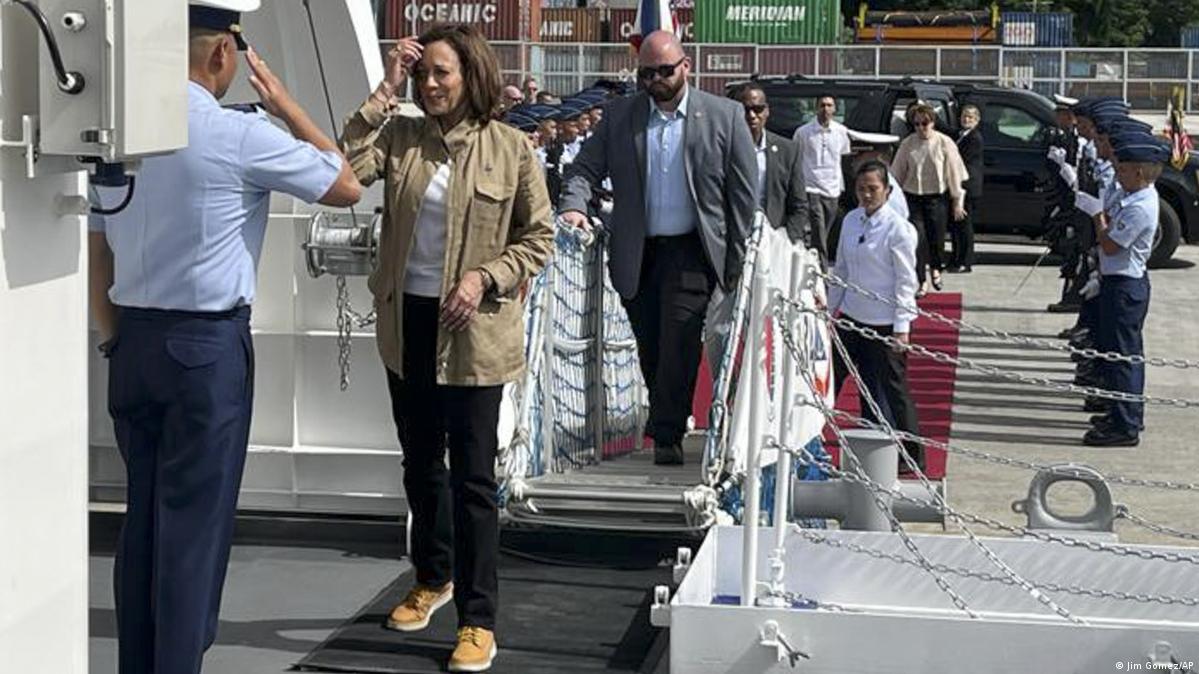 The US vice president’s rare visit to the Palawan island comes after she pledged her country’s support to the Philippines in any naval confrontation with China.

Harris met fishermen in Tagburos, where she spoke to local leaders and fishermen of the Palawan coastal community.

“Communities like this have seen the consequences, and people here know the impact when foreign vessels enter Philippine waters and illegally deplete the fishing stock, and when they harass and intimidate local fishers,” the Reuters news agency quoted her as saying, in reference to China.

The rare visit came as another show of support for the Philippines, one day after the vice president vowed that the US would respond to any potential attacks on the island nation in the disputed naval region.

The western island of Palawan is the Philippines’ closest landmass to the Spratly archipelago. The latter is claimed by the Philippines, Malaysia, China and Taipei.

Harris is the highest-ranking US official to ever set foot on the island. It comes amid heightened tensions with China, which accuses the US of meddling in strictly inter-Asian affairs.

An op-ed in the Chinese state-run English-language tabloid Global Times accused Harris of “fanning the flames of the South China Sea issue” with her visit to Palawan.

The Chinese Foreign Ministry meanwhile commented on Harris’ Philippine visit, saying: “We are not against the US interaction with regional countries. But it should be good for regional peace and stability and not damaging to other countries’ interests.”

Why is Harris visiting?

Beijing claims most of the disputed maritime region, and has rejected a 2016 international arbitration which found China’s expansion in the area was unfounded.

The US vice president boarded a Philippine coast guard vessel on Tuesday, where she delivered a speech carried by Reuters. Harris stressed the 2016 ruling “is legally binding and must be respected.”

She also stressed that her country and the broader international community at large “have a profound stake in the future of this region,” as she spoke from the vessel.

“We must stand up for principles such as respect for sovereignty and territorial integrity, unimpeded lawful commerce, the peaceful resolution of disputes, and the freedom of navigation and overflight in the South China Sea, and throughout the Indo-Pacific,” Reuters quoted her as saying.

During her visit to Palawan, Harris announced a new package of US maritime law enforcement assistance worth $7.5 million (€7.3 million) for the South China Sea.

The US Trade and Development Agency is also securing congressional support for a Philippine Coast Guard vessel management system, to expend capabilities to cover major ports and navigation paths.

Confrontation at the South China Sea

The highly contested South China Sea, where China, the Philippines, Vietnam, Malaysia, Taiwan and Brunei have all lain claims, is believed to be rich in natural resources.

In recent years, however, Beijing posed the most aggressive claim, deploying hundreds of its coast guards and maritime vessels to patrol the waters, often harassing boats its vessels come into contact with, and interfering in oil and gas exploration.

The latest confrontation came last Sunday, when a Chinese coast guard vessel stopped a Philippine navy team towing the remains of a Chinese rocket recovered near Pagasa Island. The Chinese vessel forcibly seized the debris, according to Philippine officials.

The Chinese embassy denied it had seized the wreckage, saying the Philippine team handed it over to their coast guard following a “friendly consultation.”

On Tuesday, Philippine President Ferdinand Marcos Jr. told reporters his country would send Beijing a diplomatic note to enquire about the discrepancies between both versions of events.

“I have complete trust in our navy and if this is what they say happened, I can only believe that that is what happened,” he reportedly said.