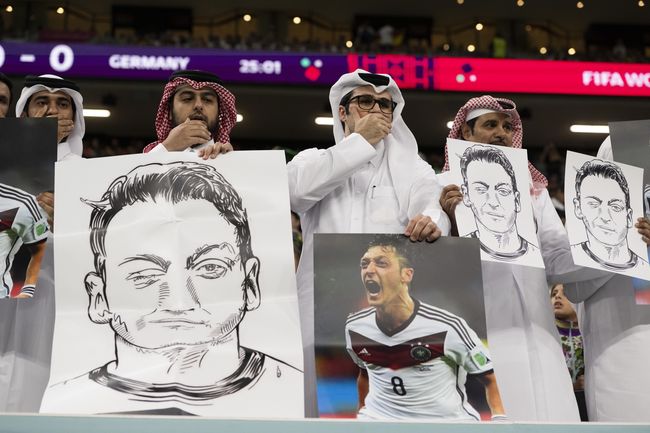 Germany and Spain locked horns in a Group E encounter on Sunday which ended all square after a pulsating 90 minutes. While the game was devoid of any controversy, the sidelines gave rise to another topic point after Qatari fans clapped back at the German football team and federation for its hypocrisy and woke gestures.

The Qatari fans in the stands hit back at Germany by holding photos of former German international Mesut Özil. The photos were in a response to the German football team covering their mouths during the match against Japan in protest over the ban of ‘One love armbands’ by FIFA.

The Qatari fans were reminding the Deutsch football team that it never stood for its own player who was made a scapegoat for the teams’ insipid show at the 2018 event in Russia. Germany suffered a group-stage exit at the tournament but it was Özil who was targetted for the setback.

Both Özil and his teammate Ilkay Gündogan had posed for a photograph with Turkish President Recep Tayyip Erdogan before the start of the 2018 WC. Afterwards, Özil became the centre of controversy as the German media, public and the federation hounded him.

Özil quit the German national team following the tournament citing ‘racism’ and ‘disrespect’ as the reason. “I am German when we win, but I am an immigrant when we lose,” Özil said famously, at the time.

“When high-ranking DFB officials treat me as they did, disrespect my Turkish roots and selfishly turn me into political propaganda, then enough is enough,” said Özil in a statement at the time.

“This is not why I play football, and I will not sit back and do nothing about it. Racism should never, ever be accepted,” he added.

At the time, the former Arsenal player was advised by the upper hierarchy of German football to not mix politics with the game. However, the same federation is now willing to break the rules set by FIFA and the host country to further its agenda.

After German players covered their mouths during the photo, the German FA released a statement saying, “We wanted to use our captain’s armband to take a stand for values that we hold in the Germany national team: diversity and mutual respect.”

“Together with other nations, we wanted our voice to be heard. It wasn’t about making a political statement – human rights are non-negotiable. That should be taken for granted, but it still isn’t the case. That’s why this message is so important to us. Denying us the armband is the same as denying us a voice. We stand by our position,” it added.

Continued repression on Tajikistan Pamiris
Rory McIlroy deserves to brag after winning the DP World Tour’s season-long title: ‘I’m as complete a golfer as I feel I’ve ever been’