Home » Will not tolerate any infringement on Sri Lanka’s sovereignty, territorial integrity: China 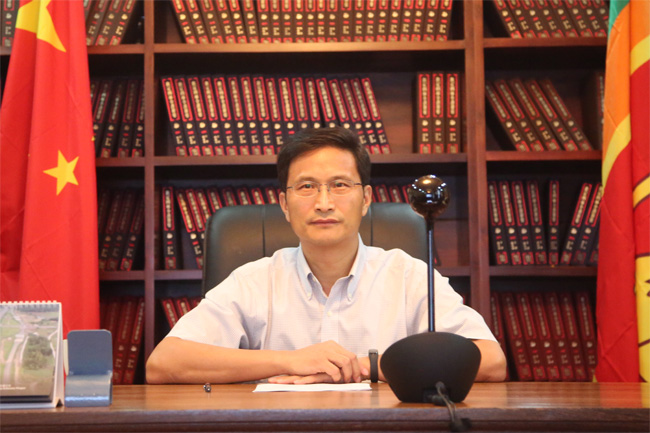 China has always been supporting Sri Lanka in the international fora for protecting its sovereignty, independence and territorial integrity, Ambassador of China to Sri Lanka Qi Zhenhong says.
Post Views: 183

Beijing (30/08 – 83.33) China has always been supporting Sri Lanka in the international fora for protecting its sovereignty, independence and territorial integrity, Ambassador of China to Sri Lanka Qi Zhenhong says.

In an article titled, “From One-China Principle to Yuan Wang 5: Let’s Join Hands and Resolutely Safeguard Our Sovereignty, Independence and Territorial Integrity”, he reiterated China’s continued commitment to support the island nation.

He noted that human rights issues in Sri Lanka are likely to be stirred up again at the 51st session of the UN Human Rights Council to be held in Geneva next month.

“As the Sri Lankan people are still grappling with severe economic and humanitarian difficulties, many might wonder what those countries who have been always preaching about human rights will actually do. Will they help Sri Lanka to ease its human rights crisis by providing concrete support? Or will they again use human rights as a cover-up tool to interfere into the island nation’s internal affairs and continue to rub salt into the wound of Sri Lankan people? Just let’s wait and see.”

The Chinese envoy said any infringement on the national sovereignty, independence and territorial integrity of Sri Lanka will not be tolerated.

With regard to the visit of the Chinese research vessel Yuan Wang 5 to Sri Lanka, Mr. Qi said approving a foreign vessel’s port call at Hambantota or any other port for replenishment is a decision made by the Sri Lankan government completely within its sovereignty.

All scientific research activities of Yuan Wang 5 complied with the international law and common international practice, he said further, adding that external obstruction based on so called “security concerns” but without any evidence from certain forces is de facto a thorough interference into Sri Lanka’s sovereignty and independence.

“Fortunately, with China and Sri Lanka’s joint efforts, the incident was resolved properly, which not only safeguards Sri Lanka’s sovereignty and independence, but also defend the international fairness and justice once again.”

The Chinese ambassador also slammed the visit of Nancy Pelosi to Taiwan, claiming that it is a serious violation of the One-China Principle and the provisions of the three China-U.S. joint communiqués.

Mr. Qi remarked that it seriously infringes on China’s sovereignty and territorial integrity, gravely undermines peace and stability across the Taiwan Strait, and sends a seriously wrong signal to the “Taiwan independence” separatist forces.

He also dismissed the claims that China has overreacted, escalated the tension and changes the Taiwan Strait status quo. “It is the US and the Taiwan separatists that commits irresponsible acts, changes and escalates the Taiwan Strait situation, not China. China has every reason to respond unhesitantly to the severe impacts caused by the Taiwan visit of Speaker Pelosi, second in line to the US presidency and the No. 3 official of the US government.”

Upholding the One-China Principle is not only about safeguarding China’s core interests, but also safeguarding the UN Charter and the basic norms of international relations, the Chinese envoy said further.